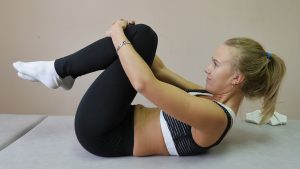 “Our program delivers a fitness that is, by design, broad, general, and inclusive. Our specialty is not specializing. Combat, survival, many sports, and life reward this kind of fitness and, on average, punish the specialist.” (1)

“The CrossFit program is designed for universal scalability making it the perfect application for any committed individual regardless of experience. We’ve used our same routines for elderly individuals with heart disease and cage fighters one month out from televised bouts. We scale load and intensity; we don’t change programs.” (1)

“The Games season is broken up into three stages. The first step is the Open, a worldwide, inclusive, five-week competition that kicks off early in the spring.” Emphasis added by me 🙂 (2)

So you have read the posts about crossfit’s dirty little secret Rhabado. I will not go into any of that, as I find it more amusing than worth talking about. The real dirty little secret to crossfit is this statement. “We think we are better than you!” It pains me to say that due to my work with crossfit, and the people I know who do crossfit. Before you shut me down completely, read my thoughts and realize I love crossfit, and many of the people that do crossfit choose not to pigeon-hole themselves with my previous statement. However, corporate crossfit, and many other people on the crossfit blogs DO believe that statement in one way or another. Crossfit teaches functional movements. This is why I love it so much. Dead lifts, squats, shoulder press, rowing, running, these are motions that are motions we do in daily life whether we recognize it or not. Learning how to do these motions correctly is, in my opinion, the magic pill to long term whole body wellness. In my profession, people “tweak” their backs more often by performing a lifting motion that put all the stress on the lumbar spine, rather on the hip joints. If they had done training that taught them with repetition how to lift something off the ground, maybe they would have not messed their back up lifting wrong, because muscle memory would have told them to lift with hips rather than back. Many trainers choose not to implement Olympic style lifting into their routines that they give their clients, due to the danger involved. As a sub note, yes there is more danger involved with Olympic lifting, denying that is simply obtuse. However, the benefits to lifting with Olympic style lifts with good form far outweigh the risks.

So who exactly should do crossfit? If you were to ask me, I would say everyone can do crossfit, but that it may not be for everyone. Some may not be excited about working to exhaustion at least 3 times a week. I am fine with that. My concern is that I hear more and more, I may try crossfit, but I need to get in shape first. This mentality that people have with crossfit is both good and bad. This statement recognizes that people realize that crossfit is hard work, and that they may not be ready for that. However, it also misses a fundamental point of crossfit, which it is not only for those IN shape, but it is also good at getting you into shape. People see the well toned bodies at the Crossfit Games, and think, “Wow, I could never be in that shape, so crossfit is not really for me.” They do not see Lebron James playing basketball, and think the same thing about basketball. This is the dilemma that crossfit now faces. Is it an elitist sport, or is it a lifestyle? Many who do crossfit would agree with the lifestyle idea, as would corporate crossfit if you were to believe their statements that it is an “inclusive” mentality. Inclusive indicates that everyone can and should participate. Inclusive indicates that if were running a competition then we will make the competition so that you can participate, but you will still get smoked by the better players. Inclusive is what rec league basketball is all around the country. People from all aspects of life, college level, down to weekend warriors with no real legitimate experience getting together to exercise and sweat. Exclusive would be setting up the rec league and saying you can play only if you can dunk. Exclusive is not in and of itself bad, as long as transparency in its exclusion is apparent. Continuing on in the rec league idea if you signed up for the inclusive league and your first game were informed only those who could dunk would play, otherwise you ride the pine. This is deception, and I believe you have every right to be angry about this.

Now we get to the crossfit games. Round one gave us double unders (DU), which I was not very excited to see, but it saw a slew of people get their first DU, which is a good thing. DU are inherently safe, as the only real damage you can do to your body is cuts and bruises from the rope. One could call the DU slightly exclusive, but for the sake of argument, let’s just say anyone should be able to do at least one by jumping as high in the air as they can and swinging the rope as fast as they can. Round two gives us overhead squats (OS) and chest to bar (C2B). Where to begin with this workout…….. C2B is hard. If we were talking face to face, I would have said period after that statement, but in writing, the effect is lost. C2B done 20 times in 3 minutes is a very challenging thing for a majority of the people on the planet to do. I am going to go out on a limb and say that it is a challenging thing for a majority of the crossfit people to do as well. This form of exercise is an exclusionary exercise….. only for the sake of being exclusionary. This exercise at this point in the games screams “We think we are better than you!” A plethora of other type events could have been used to compliment the OS, (burpees, pushups, rowing) but they weren’t chosen. Why not?

I do not mind the event being what it is, what I do not like is telling people your event is inclusive, the putting forth an exclusive event. Crossfit corporate is saying, “Our fitness event is not a fitness event, it is a sport.” I am fine with crossfit being a sport. I disagree with it being a sport, but I am ok with them calling themselves a sport. They don’t call themselves a sport; they dub themselves a universally scalable, form of fitness. Crossfit says they welcome the masses to the idea of fitness, and nutrition, and encourages the people to push themselves to the limit, and joint a worldwide competition. Then when people do join the movement, they look at you and say, “Yeah, you’re not good enough yet.” or “You get disqualified from the competition with a score of zero.” We’re dealing with people that have stories to tell. People that have been picked last their whole lives, and decided through some crazy idea that even though they were 100lbs overweight that they would give this crossfit thing a try. They were encouraged by the weight loss and how good they felt after 6 months of crossfit, and started hearing about this crossfit open thing. When they first heard of it they didn’t even give it a second thought, because they couldn’t do the things those “boss” people in the box could do. They accept the fact that they will likely never do muscle ups, or hand stand pushups, or string together 40 pull-ups like the god/goddesses that they see in the box when they go. However, those same people that they know they will never be, encouraged them as did the box owner to enter, because it would be fun, and it’s all inclusive. “They will make the first couple of exercises so everyone can do it, and you will be able to compare yourself to others, with no shame, or concerns.” Because this is what crossfit is at its core; a fitness movement that pushes you out of your comfort zone. So they signed up, and started getting excited about it. They started training some of their weaknesses and tried to move up some of the weight that they could lift. 14.1 comes out and DU’s kill them, however, they manage to get through 10 DU in the allotted time. They looked back and realized that just six months ago, the idea of doing one of those was impossible. Now they did 10. They were excited to see what came up next, as they could do most other movements required of crossfit. The next one will be something they can do more of and get a good idea as to where they really stand. They watched with anticipation the 14.2 rollout………

“We think were better than you!”

“What the hell was I thinking?” “I’m fooling myself, I can never really get up to shape like I want too, because I could never even do 3 minutes of that sporting event.” Corporate crossfit wanted me to know that this thing was not for me, because I am just not good enough, nor will I ever be. They were talked into entering, and encouraged by all their people at their box, only to be told by corporate that they needed to be able to dunk to play, but thanks for entering.

The psychological implications of getting and staying in shape is something that many fitness people will never understand. It is hard to decide at the age of 35 that you are sick of being overweight, and now want to change your whole lifestyle. Crossfit should absorb those people, as it offers a lifestyle change of diet and exercise. People like this will however see the sport of crossfit, and make the assumption that they cannot ever do those types of things, and will not become a part of the crossfit community. This is doing a disservice to the crossfit community, as it is choosing to make it an exclusive group rather than inclusive. If crossfit is going to continue as a fitness movement, it has to move its mentality from one that makes people think, “I will try crossfit as soon as I get into shape.” To a mentality of “I will go to crossfit to get into shape.” See, if crossfit keeps its elite status, it loses clients. In general, people will do their workouts to “get in shape for crossfit” and never make it up to crossfit shape. Consequently, they never join the crossfit affiliate, and the local crossfits never increase membership. It’s a branding issue that will only serve to keep the current subscribers of crossfit, but not really gain that many members.

My plea to crossfit corporate is. Please make your workouts inclusive. The idea of crossfit is growing, and it is a movement that includes diet, exercise, and healthy living. Add to the idea of crossfit a mentality that we take all people. We take fat people, who need to get into shape. We take non-athletes who have not one ounce of athletic ability. We take weekend warriors who can only really do 3 workouts a week. Crossfit is an inclusive group, which scales load and intensity. My box is this way. I know many other box’s that are similar. Corporate should learn from their franchises.

We will do our best to accommodate your busy schedule